🚨 What you need to know about the Log4Shell vulnerability

Developers spend 30% of their time on code maintenance: our latest survey results, part 3

In our latest survey, which we ran in November and December of last year, we set out to answer some of the follow-up questions that arose after we analyzed the earlier results. Nearly 300 developers responded to our survey, which dives deeper into how professional developers use open source today.

Part 1 covered the reasons professional developers use open source. In part 2, we examined concerns they have with open source, such as avoiding vulnerabilities and making safe bets on packages being maintained in the future.

This post focuses on how much time professional developers dedicate to code maintenance and how much of this time is associated with the open source packages they use.

Finding #3: Code maintenance takes 30% of the average developer’s week, and a quarter of that time is related to the open source packages they use

Our survey found that most respondents (70%) spend between 11 percent and 50 percent of their time on code maintenance. For a 40-hour work week, this equates to between 4.4 and 20 hours per week.

When we translate the percentages into weekly hours for all respondents, the average time developers in our survey spend on maintenance is 12 hours per week. This turns out to be slightly lower than the findings in this report from Stripe, which estimated 17.3 hours spent on code maintenance (13.5 hours addressing technical debt and 3.8 hours on bad code).

But it does beg the question, if developers could get some of this code maintenance time back, what else could they do with it? 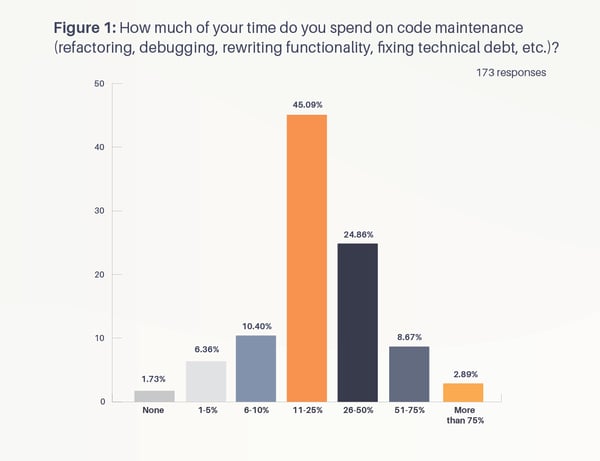 We examined the data by respondent geography, development team size, and role/title. The results are mostly consistent across these parameters, with one important exception. 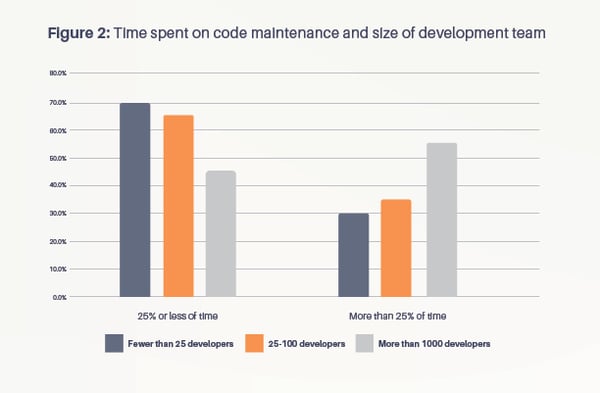 We suspect this could be a factor of the age and size of the codebase, with bigger teams typically working with larger and older codebases, which require more maintenance to keep up to date.

On average, the open source packages professional developers consume contribute 25% of the total code maintenance workload. But this average masks some interesting variance. 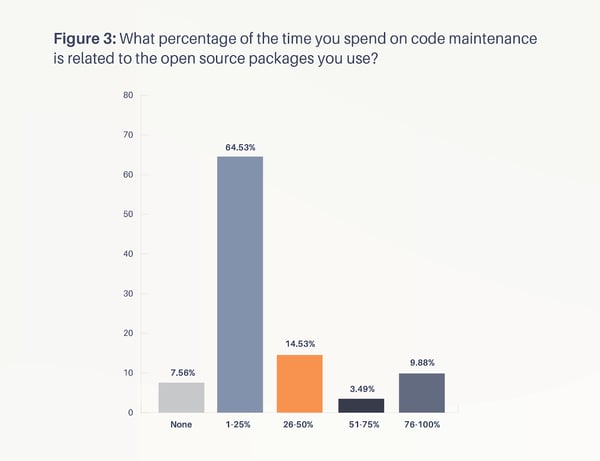 These percentage splits are consistent across geography, title, and size of development team, which means some other factor may be at work. One possible explanation might be that developers reporting the majority of their code maintenance work is on open source software may work on applications that only use open source components. Or it could be that the task of open source package maintenance where they work is assigned to specific developers, rather than be distributed evenly across the development team.

The most common open source maintenance work is improving, replacing, and keeping up with packages

Survey respondent: "There are times where an open source platform or dependency's developers no longer have the time to contribute to the projects and the teams can dwindle down until there's no longer support from the leaders in that community."

Figure 4 shows which activities most commonly consume this time. 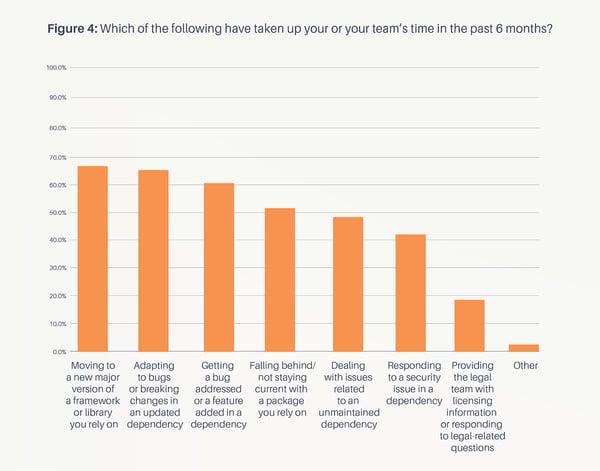 The most time-consuming and common open source maintenance task is moving to a new major version of a framework or library. This is closely followed by adapting to bugs or breaking changes in an updated dependency. Other time consuming maintenance activities include getting a bug addressed or a feature added to a dependency, falling behind / not staying current with a package, and dealing with issues related to an unmaintained dependency. Somewhat surprisingly, responding to security issues in dependencies consumes less time according to our respondents (although the ramifications of security issues when they do happen can be quite severe).

Frequently, these maintenance activities occur together. For instance, a maintenance lapse in one of the hundreds of React dependencies can trigger a number of activities, as the following tweet illustrates.

We will be publishing our complete survey findings shortly in a complete report. Be sure to subscribe to updates from the Tidelift team and follow us on Twitter to get updated when it’s available.

Better together: cultivating an open source ecosystem that works for everyone