The most important factors when choosing a new open source project

In June of 2019, Tidelift and The New Stack jointly fielded a survey of professional software developers. Almost 400 people responded with thoughts about how they use open source software today, what holds them back, and what tools and strategies would help them use it even more effectively. In particular, with this survey, we were interested in learning how a managed open source strategy might help developers reclaim time, speed up development, and reduce risk.

In this post, we share the fifth of eight key findings. If you don’t wait to wait for the rest of the results, you can download the full survey report right now at the link below.

Given the maintenance headaches respondents described in earlier findings from this survey, one obvious way to avoid them is to make good package choices in the first place. In the next part of our survey, we asked developers to tell us more about how they make decisions regarding which open source packages to use.

The first question on the subject asked how important some key project characteristics are when developers select packages. 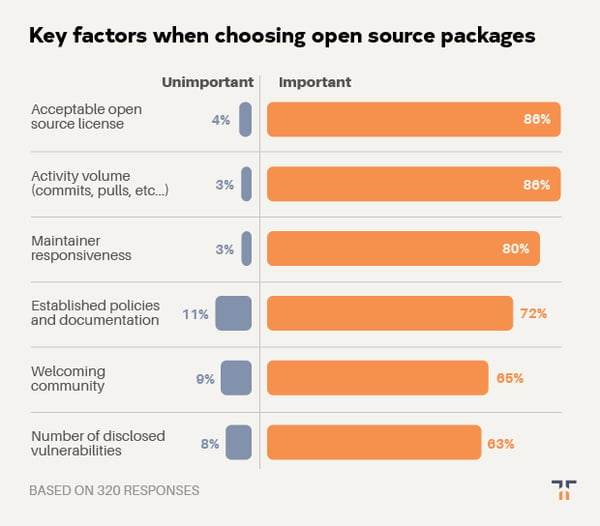 This is particularly meaningful for companies with more than 1,000 employees, where 78% of respondents say having an acceptable open source license is extremely important. These findings clearly show that there are some “dealbreaker” licenses out there that most users attempt to avoid.

While activity (e.g., recent and volume of issues, commits, and pull requests) tied with licensing in overall importance (86%), it had a lower percentage rating extremely important (43%) than licensing.