What is it like to be an open source maintainer in 2021: A panel discussion of the Tidelift maintainer survey highlights

Earlier this year, Tidelift completed its first ever survey of open source maintainers (read the whole report here). Nearly 400 maintainers responded with thoughts about how they fund their work, what they enjoy about being a maintainer, what they don’t like so much, along with a host of other interesting insights. We thought it might be fun to invite some folks to discuss key findings from the survey and share some additional thoughts.

Last month at Upstream, we hosted a discussion with maintainer panelists including Isabel Costa of AnitaB.org, Gina Häußge of OctoPrint, John Leider of Vuetify, and Alex Clark of Pillow. They were joined by developer research expert Lawrence Hecht, who led the analysis of the survey results, and Ewa Jodlowska, executive director of the Python Software Foundation.

They focused on these findings:

#1: About half of maintainers get paid nothing for the work they do. And only 6% earn what could be considered a living wage for their work. We asked if this was a surprising fact:

“Personally I am not even remotely surprised,” Gina said. “Or if I am surprised, I’m surprised that it’s already 6% that are making a living wage.”

“I am also not surprised by these results, but I am optimistic that we are on a track to improve the status quo,” Alex said. “It’s an exciting time.”

“This is changing,” Ewa said. “We are seeing through this data that there are some improvements happening. How long is it going to take us to get to a sustainable place where maintainers are getting paid what they need to get paid...before it’s too late?”

“I think most folks start out just to do it and are not really thinking about making a living doing it,” Alex said. “So to get paid for it is akin to getting a record deal. To get paid for something that you would do anyway is really what’s happening with open source.”

“I would not necessarily be doing it anymore if I wasn’t getting paid,” Gina said. “I was at a crossroads and either now I monetize what I’m doing here, or I have to stop doing it because it was becoming unhealthy to do the maintenance of my project as a side hustle.”

#2: What do you enjoy most about being a maintainer? Most maintainers enjoy making a positive impact and doing challenging, creative work.

“Pillow is on Mars,” Alex said. “So that makes me very happy.”

“From the general Python standpoint, the personal and community impact of it is very important to a lot of people,” Ewa said. “One of the most popular sayings in the Python community is, ‘I came for the language and I stayed for the community.’ I think that says a lot about why people are where they are.”

“My focus when I contribute is mostly in the community,” Isabel said. “I hear a lot of people say they don’t know where to start to contribute to open source. I do advocate work. I can help a lot of people that are not contributing because they are very intimidated.”

“I’ve gotten so many new friends through my open source project,” Gina said. “People who I would have never met otherwise.”

“Maintainers in Europe were much more likely to be lonely than the maintainers in North America,” Lawrence said, expanding on a data point he found interesting. “What I gathered was that the people in North America seem to have combined their work and personal life together, and that created more stress. But it also meant the open source maintainer community was also combined.”

“It can be stressful and toxic, and you have to learn how to deal with it like you do in real life,” Alex said. “I’ve worked on other open source projects where I didn’t have the experience to know what was healthy and not healthy.”

“It took quite a while to get to the point where I didn’t feel lonely anymore,” Gina said. “When I was working from home 100% and not having colleagues, that was a very hard cut in my life.”

“I’m a female open source maintainer, and according to the majority of people using open source out there, I do not exist,” Gina said.

“There’s small change happening and it’s not happening fast enough, ” Ewa said. “I think the only thing that will solve it is more funding. Individuals can only do so much. Mentoring someone can quickly become overwhelming.”

“I think representation matters so much,” Isabel said. “I’m naturally part of some women in tech communities, and also black developers communities, and what I can do is be more visible. Hey, open source is not that intimidating and you can be a part of that, too. You can contribute as a designer, project manager, tester.”

Watch the whole discussion on-demand now to hear from an awesome, diverse group of open source maintainers and community members, discussing data points that have never been gathered before. 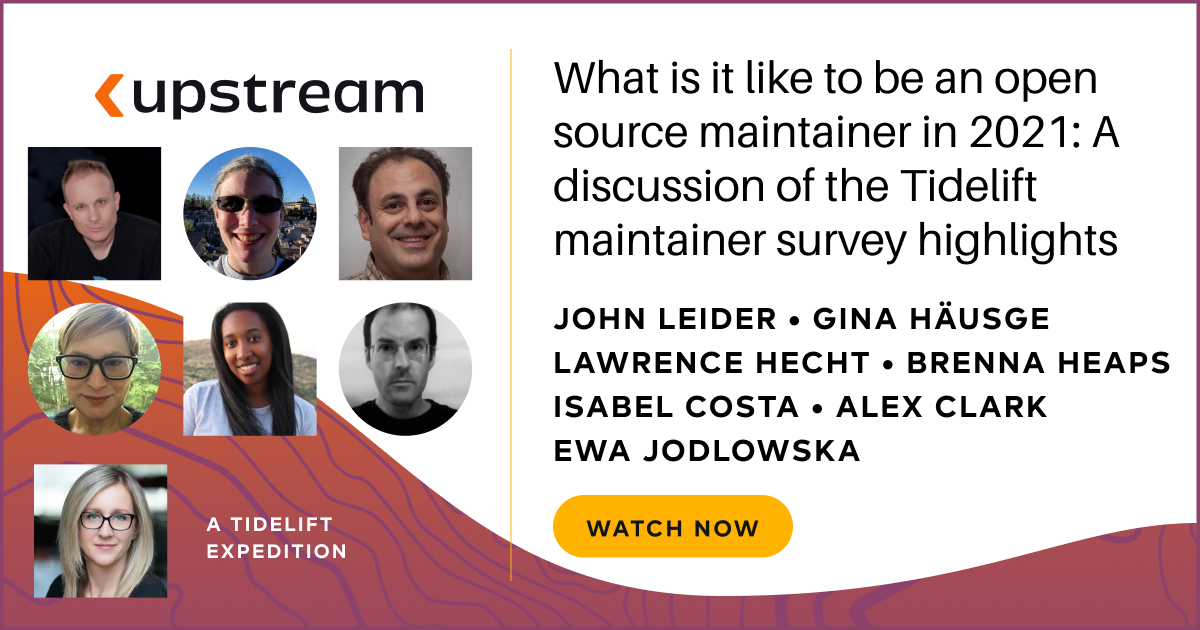