One Saturday night in February, I was doing what “the cool kids” do on Saturday night—looking through LinkedIn job postings. I live in a smallish town in Tennessee called Chattanooga and there aren’t a huge amount of opportunities out there for digital marketing managers, so I expanded my search to include “remote” and Tidelift popped up.

What is this? I thought. I read the job description, thought it perfectly described me, and started researching the very little information about Tidelift there was to find online at the time. The more I read, the more I became convinced that I MUST work for Tidelift, that this was the place I was meant to work.

Why I joined Tidelift even though I know very little (i.e. .001%) about open source software

I’m not sure if I can succinctly explain why. Was it a feeling? Was it the bright orange header, muted by the navy-ish gray? Was it the tone of the text, forthcoming and affable? Was it the plight of the open source developers, who work day in and day out, crafting code out of love, a plight I was oblivious to before finding the job posting?

I can’t tell you why I immediately knew Tidelift was the place for me, but I can tell you that my instincts were on point: Tidelift is an amazing place to work.

I was one of the first hires whose background in software development is null. I know some basic HTML, but that ain’t development, y’all. (I’m bringing a little Southern charm in here.) I know how to tell web developers what’s breaking on a website—usually I say, “Hey, I think it’s something with the Javascript.” (I mean, it really is usually something with the Javascript, OK.)  So I was a little nervous when I started, because the Tidelift team is so smart. They make magic happen with some strokes of the keyboard, guys. For real.

But you know what I encountered on my first day? Total accessibility. I felt included and welcomed. I was trained more on my first day than I’d ever been trained for a job in the past. Everyone is brilliant, but totally willing to admit when they don’t know something. That’s what life is about! No one knows everything. Adulting is basically pretending.

I learned quickly, though, that the Tidelift mission is real and powerful. The whole team lives and breathes the concept of paying the maintainers. Open source maintainers build powerful tools that make the whole world better. So we want to see them get paid—and paid well—because, hey, they deserve it!

Now, let’s move past this lofty goal and culture talk and get to the real meat of this blog post—my animals. I have an 11-year-old dog named Oliver and a 17-year-old cat named Spice. Spice hates (and secretly loves) everyone. Oliver thinks every human was put on earth to play with him. 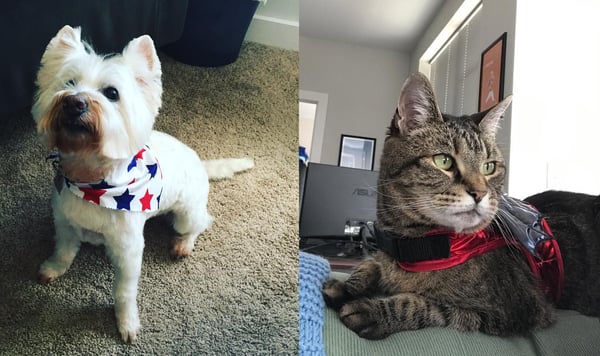 (Yes, Spice does have a batwing harness on. Spoiler alert: She hated it.)

I work remotely from Chattanooga, so they are my in-office coworkers. Aren’t they adorable?

Why you should join Tidelift

So—back to the point. Why did I join Tidelift?

Are you looking to join a company with an amazing mission? Well, you’re in luck, because we’re hiring!