Would maintainers work on their projects more if the 💰 was there? Survey results part 7

We received over 1,200 responses, and now we’re sharing our key findings and more details about our dataset. In our last post, we discovered that it is rather difficult for open source maintainers to find time to work on their projects, especially for those whose projects do not have external funding.

This finding begged the question: would better financial support make it easier for maintainers to work on open source? And would they be interested in working on more projects if they were paid well?

Insight 7: if they were well paid, open source maintainers would want to spend more time working on more projects

The first question we asked maintainers was simple: suppose you were fairly paid for your time, how many hours would you want to work each week on open source projects?

Our respondents showed a strong interest in spending significant time working on open source software. Assuming they were fairly paid, nearly 50% of respondents said they would be willing to work over 21 hours per week. 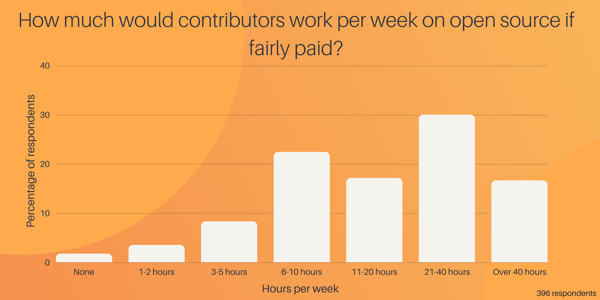 While this data is interesting, one could say it’s to be expected that open source developers would want to spend more time working on their projects if they were well compensated. But the next data point turns out to be even more interesting.

Not only do the respondents want to spend more time working on open source, but they would also be highly likely to maintain more projects if they were paid for their time:

We asked maintainers to rate, on a scale of 1 to 10, how likely they would be to consider maintaining additional open source projects if fairly paid. Their median response of 8 indicated that they would overwhelmingly be interested in working on more projects. Over 85% of respondents rated their interest greater than 5, and a surprising 25% maxed out our scale by rating their interest at 10—the highest possible score.


This is a fascinating finding, as it sheds some light on the incentives around open source: maintainers are not exclusively interested in working on their individual projects, and financial support seems to be a primary factor blocking them from doing even more open source work (if not the primary factor).

With this discovery, it would appear that there is a supply of open source maintainers who could meet the demand of professional open source users for more dependable support and maintenance around their software.

Which brings us to our next question: are maintainers interested in doing the same work that professional users have told us they are willing to pay for?