How much would professional users pay for supported open source? Survey results part 4

Insight 4: 83% of professional users will pay for supported open source

In a previous post, we identified what companies value most when they evaluate open source dependencies: maintenance, active community, and security. In addition, we learned that licensing assurances were valuable for many larger companies; 24% of companies of over 500 developers stated that it was their most important factor when evaluating open source libraries.

With this in mind, we asked our respondents how much they would consider paying for well managed, supported, licensed, and secured versions of all the open source they already rely on. The results were striking: 83% percent of respondents stated that they would pay for such guarantees. 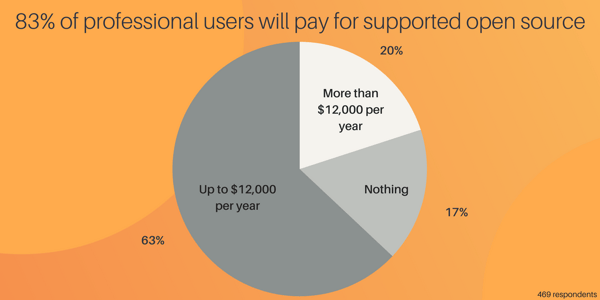 What happens if we drill down into the demographics of these respondents? First, we see that whether or not a company already pays for commercial open source support is a key indicator of whether they would consider paying for well managed, supported, licensed, and secure open source: these companies are more than twice as likely to pay over $12,000 per year.

Not shockingly, supported open source software is more valuable to larger companies. They were four times more likely than the average respondent to be willing to pay over $120,000 per year.

But this doesn’t mean that it’s only large companies that would be willing to pay for better assurances and support for their open source software. In fact, there was only a 0.5% difference between the smallest companies (less than 25 developers) and all the others in terms of their willingness to pay!

This not only means that companies see having well maintained, secure, and properly licensed open source software as valuable regardless of size, but as the development team gets bigger, it becomes even more valuable. In fact, a company of over 500 developers is more than 15 times as likely to be willing to pay over $120,000 per year than a company of less than 500 developers.

We’ve now proven that companies are willing to pay for open source support and assurances—and potentially pay a lot! But what exactly do they want to pay for? And how can open source maintainers help? We’ll dive into this in our next post! In the meantime, let us know if you’d like to receive updates, and follow us on Twitter.