We received over 1,200 responses, and now we’re sharing our key findings and more details about our dataset. In our last post, we dove into the most important factors for companies evaluating open source libraries: maintenance, active community, and security. But we also saw the value of licensing assurances for enterprise companies, with over 24% ranking it as their most important factor in open source components. This begged the question: how exactly do companies evaluate their open source libraries today?

Insight 3: only 9% of organizations have a formal process for how to evaluate open source dependencies

With open source being used in almost all professional applications, and with different development teams valuing different aspects of the software they use, we wanted to know how these teams actually decide which libraries to use. Do they have a process that the entire company employs? Or is it up to the individual developer, with little visibility and consistency across teams? 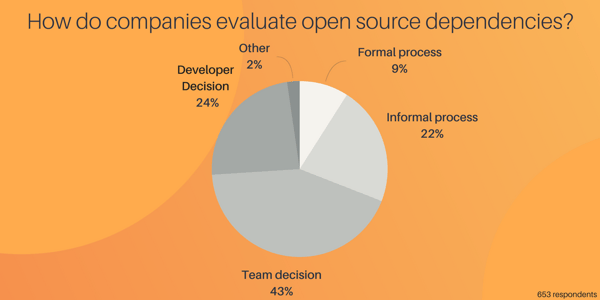 But what distinguishes the companies with formal processes for evaluating open source from those that rely on teams or individuals?

Diving in a little deeper, we see that 47% of companies with a formal open source evaluation process have more than than 500 employees working in software development. This means big companies—or at least companies with big development teams—are over four times more likely to have a formal process for evaluating open source. This is pretty intuitive. As is the fact that larger teams seem particularly averse to individual developer decision-making regarding open source dependencies: only 2.7% of these larger teams have developer-level policies.

Lastly, what do these companies value in their open source? Those with formal processes are almost three times as likely to want to pay for licensing and IP assurances around their open source than those without processes.

So would companies actually be willing to pay for more dependable open source software? And if so, how much? We’ll dive into this in our next post! In the meantime, let us know if you’d like to receive updates, and follow us on Twitter.