One of the hidden gems of the free and open source software world is the Free Software Foundation-Europe’s annual Legal and Licensing Workshop, an event for members of the group’s legal network mailing list.

Held now for a little over a decade, the workshop is a great way for invitees to stay current with the open source legal world. This year’s three-day conference just wrapped up, so I thought I’d share my thoughts on it as a long-time attendee.

The conference operates under the Chatham House rules to allow for more candid discussion. In keeping with that rule, this blog post generally won’t name speakers unless they explicitly waived the application of the rule.

The conference may touch on other themes, but in general discussion always comes back around to one thing: the many ways you can think about licensing.

One aspect that is always discussed is how to better manage licensing information. A full, top-to-bottom license analysis of just the Linux kernel can generate a few hundred thousand discrete pieces of information, with each file having associated license information, copyright information, and related analysis.

All of this needs to be tracked—and managed again for the next release of the upstream project, the downstream product, or both. So aggressive license compliance, a must-have for the biggest software companies, is a big cost.

In this vein, several tools came up quite a bit—some newer and some older: 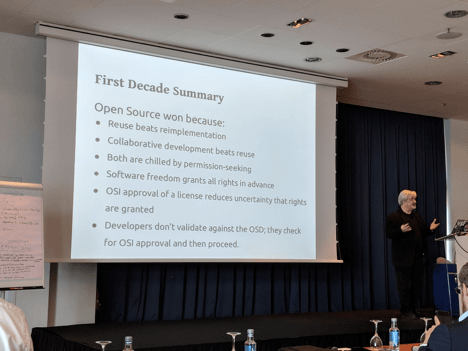 Simon Phipps speaking about the success of open source

Older systems working to keep up

Despite all the new tools, and the ongoing surge of interest in open source, many older systems and groups are still relevant.

On the flip side, James Bottomley, the most-bowtied Linux kernel developer, gave a presentation on how to work with the copyleft we’ve already got by explaining copyleft to businesses. This is still a challenge after all these years, and James’ positive approach was refreshing.

Besides tooling and data, there are a lot of other paths to better license compliance. Some things that came up:

Critically, when risk is high, highly-detailed metadata is not enough. You must also trust the process that creates the metadata, and sharing this is much harder than merely sharing data. Oliver’s project attempts to tackle this in a variety of ways, but the most interesting to me was a standardized, agreed-upon checklist of review steps, so that all participants would know the same basic steps had been taken.

With all the talk of progress and improvement, there are a few lurking challenges that came up repeatedly throughout the conference. A couple seem particularly worth noting:

The conference often covers quite a bit of ground outside of licensing, especially when topics are “hot” outside of open source. This year, three themes were mentioned in passing, but maybe not with the level of focus you might expect.

Law moves slowly, but the lawyers who work around open source do an admirable job trying to keep up with the movement of open source. As always I look forward to next year’s conference to see what we’ve collectively learned (or forgotten) in the intervening year!

So you want to write a successful license