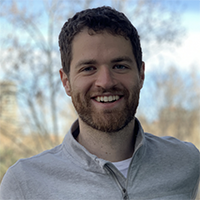 We've been working hard to make it easier for the maintainers who work with Tidelift (we call them lifters) to complete assigned tasks. We're excited to share some of these improvements.

One thing we ask lifters to do for us is to complete a set of tasks related to supported packages. These tasks are intended to be low-to-medium effort for lifters, but collectively provide a tremendous amount of value for our paying subscribers. By providing clear release stream guidance and release notes, for example, lifters help subscribers make better decisions about the dependency versions they use. By verifying license information, lifters help teams stay compliant with their organization’s policies.

We want it to be as easy as possible for lifters to complete these tasks. Here are a few of the changes that we’ve been rolling out for lifters recently.

When lifters log in, they’ll see a brand new overview screen. We wanted to more clearly flag for lifters which work needs to be done. Lifters will receive a notification card for each package that needs to be completed. Lifters also receive notifications when a previously pending package has income available to claim.

Lifters will still be able to create security alerts or broken version notices for their packages, as needed, from this overview page. 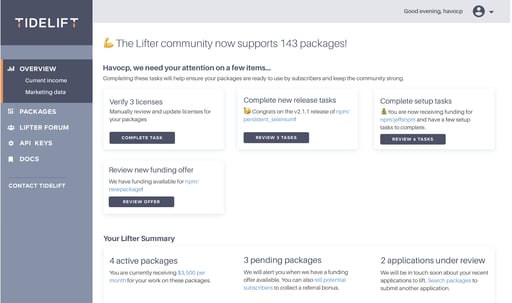 We heard lifter feedback that it wasn’t always clear what it meant for a task to be “Ongoing” or “Inactive,” so we simplified the labels. There are now just two task statuses: “Open” and “Completed.”

If a task appears in the “Open” tab, it means it needs action. Some tasks may re-appear in the open section after being completed (e.g. we will ask lifters to re-review their release streams after each major or minor release). 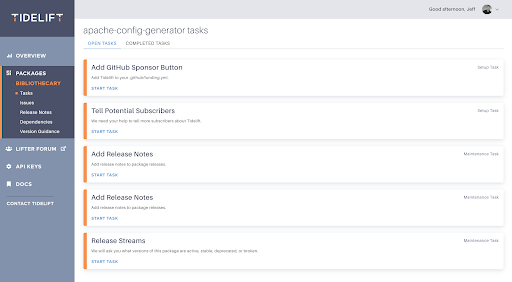 All completed tasks will appear as a reverse chronological activity log. In the case of packages with multiple lifters, the log will denote which lifter completed the task. We also show lifters which tasks were completed via the API. Lifters can also re-open a task from this page. 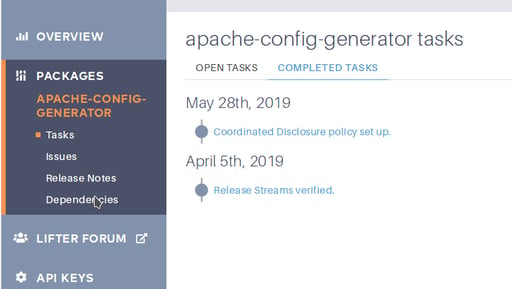 We’re working hard to improve Tidelift for both lifters and subscribers. As a member of the Tidelift product team, I plan to regularly share updates about ways we’ve been working to improve the platform.

What we are up to and how you can learn more

Tidelift provides a way to bring maintainers together in a scalable model that makes open source work better—for everyone. Those who build and maintain open source software get compensated for their efforts—and those who use their creations get more dependable software as part of a managed open source subscription.

If you are an open source maintainer and are interested in getting paid for doing the work you love while attracting more users and creating the community you want to be a part of, learn more about partnering with Tidelift.

Pupdate June 2021: Free bills of materials for everyone