Right around the time that we were getting started with Tidelift, the New York Times published a compelling editorial entitled “Let’s Get Excited About Maintenance.”

Innovation is overrated. Let's get excited about maintenance https://t.co/gP1ReZSN1l

In the article, which focuses on civic infrastructure like transit systems, academic researchers Andrew Russell and Lee Vinsel argue that we have "an impoverished and immature conception of technology, one that fetishizes innovation as a kind of art and demeans upkeep as mere drudgery.”

The focus on innovation vs maintenance is as true of software as it is of our roads and bridges.  We’re not the first to point out the parallels.

The individuals and teams who maintain widely used open source software tend to get short shrift. They toil day in and day out, out of the spotlight, typically for little direct reward.

People who maintain open source software deserve to have normal lives. E.g., enough money to live reasonably, enough time to have families, and a work life free from abuse.

It doesn't make sense that we sacrifice these things so companies can save money on their software stacks.

What can be done? Many have made the case in recent years: let’s pay the maintainers. 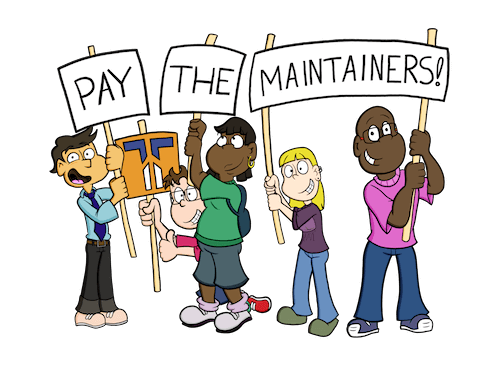 Pretty obvious, right? Then why isn’t it working?

To date, most efforts to “pay the maintainers” have been focused on altruistic appeals.

The typical pitch is something like “You know you (or your organization) rely on this software, and directly benefit from the work of the open source community. Shouldn’t you donate to the teams that make it happen?”

For better or worse, this framing of open source support as charity doesn’t match the behavior or norms of most professional organizations. They’re used to paying for products and services.  If there is any outlet for charitable donations, it’s a completely different process in the organization (and often at drastically smaller scale).

How can we fix this?

Let’s sell professional software teams a service that has direct value, packaged just like other things they buy to power their business.

That, in a nutshell, is the ambition of Tidelift.

Tidelift makes it possible for organizations to pay for promises about the future of the open source software they depend on, just like they’ve paid for maintenance from traditional software vendors since time immemorial.

By working with open source maintainers and core teams to standardize assurances around the security, legal compliance, and maintenance of their projects, Tidelift makes it possible for those assurances to be aggregated and provided on a paid subscription basis to professional software teams.

Those teams, in turn, have a single place to go for the assurances they need around the software building blocks that underlie the business-critical applications they’re building. Tidelift makes it possible to have the best possible experts—the creators themselves—affirmatively signed up to care for critical software today and in the future. And Tidelift is there to back them up and make things easy for everyone. Once an organization is up and running with Tidelift, each new open source ecosystem is just a click away, skipping the need to go through cumbersome and expensive onboarding and procurement processes over and over again.

Critical to the model: unlike traditional open source vendors, Tidelift works cooperatively with upstream open source communities and incorporates them into the economic system, with the majority of subscription fees paid out to participating project maintainers.

We think Tidelift provides the best of both worlds. Professional software teams get the assurances they need, at a fair price. And open source creators get paid their fair share for the work they do.

By aligning all parties’ interests, open source creators get compensated for their work, without resorting to a charity appeal.

That’s what we call a win-win.

As the authors of the New York Times op-ed put it: “While innovation—the social process of introducing new things—is important, most technologies around us are old, and for the smooth functioning of daily life, maintenance is more important.”