So we pay the maintainers... what would they be willing to do? Survey results part 9

We received over 1,200 responses, and now we’re sharing our key findings and more details about our dataset. In our last post, we discovered that nearly two-thirds of professional users of open source would pay for regular maintenance, and almost half of them would pay for timely security updates.

What are professional users of open source interested in paying for? We now have a resounding answer.

Next it’s time for us to look at what open source maintainers would be willing to do if they were fairly paid. Let’s see if we have a match here.

Insight 9: Most maintainers, if fairly paid, would provide near-comprehensive support for their projects 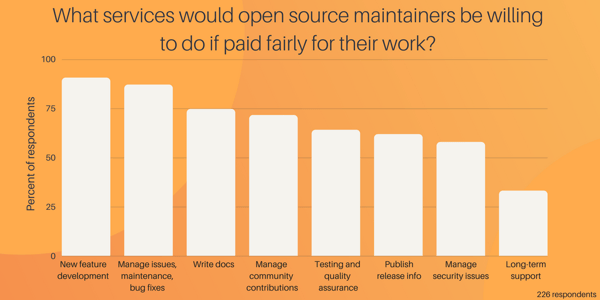 These results are striking, and they speak to the power that sustainable and equitable funding could bring to open source: the only service that the majority of maintainers wouldn’t be willing to provide if paid is long-term support for a specific version of their project (and 33% would even be willing to provide that service).

When we compare what professional users of open source software and maintainers are looking for, we see a strong match. Maintainers are definitely interested in working on the same activities that users are willing to pay for: maintenance (managing issues, testing, and quality assurance), security (managing security issues), and licensing assurances (publishing release info).

Among other issues that professional users were most interested in—developer support and consulting, new feature development—we plainly see that over 90% of maintainers would work on new features if paid. This is great!

Providing support for professional users is cloudier, as “support” is a complicated, and potentially loaded, word. We asked professional software developers if they would value having supported open source available, and we purposefully left the meaning of that vague, knowing that many people have different definitions of what support entails. For some, support means managing issues, maintenance, bug fixes, security, and good documentation. For others, it includes things like long term or phone/email support with a predetermined SLA.

So when nearly 40% said they’d be willing to pay for developer support, it probably refers to some combination of these different meanings. That said, our data shows that most maintainers are willing to work on almost any aspect of their projects if they are fairly paid.

So if we were to sum it up, when it comes to most of the highly scalable support tasks—like managing issues, maintenance, bug fixes, security, and good documentation—we absolutely have a match between what professional users want and what maintainers would be willing to provide if fairly paid.

The jury is still out on more intensive support tasks like long term support and phone/email support, and this is something we’d like to look into further in future surveys.

Lifting Up: How we help open source maintainers thrive

Tidelift advisory | Spring Framework critical vulnerability: what you need to know and do